Jeane Reeves Research Grant Recipients
GNPS received six research grant proposals in 2014 with a funding total of $3021. Three projects were submitted by professors and three were submitted by graduate students.

Dr. Judith Gordon, retired & Dr. Donna Wear, Dept. of Biology of Augusta State University are doing research on the Rocky Shoals Spider Lily (Hymenocallis coronaria), a protected emergent aquatic plant that is declining where it is growing in the Savannah River. A previous study indicated deer herbivory is greatly contributing to its decline. This proposal is to examine the role of an alkaloid,lycorine, in deterring deer browsing. Lycorine has been found in other Hymenocallis but H. coronaria has not been examined for the alkaloid’s presence or the role it may play in deer herbivory. Two biology students will help with the herbivory research. This grant will help pay for lab work done at Clemson University.

The Rocky Shoals Spider Lily (Hymenocallis coronaria) is a protected emergent aquatic plant found only in Alabama, Georgia, and South Carolina. In the Augusta Shoals habitat of the Savannah River where it was first discovered by William Bartram in 1773, the populations are declining. Our research from 2005-2007 on these populations indicates that fluctuating river flows and deer herbivory have contributed significantly to this decline. In our ongoing studies, we have been comparing the Augusta Shoals populations to a relatively undisturbed population in Stevens Creek, SC.

Grant money awarded by GNPS will be used to examine the role played by the alkaloid lycorine in possibly deterring deer from browsing on the leaves and flowers of Rocky Shoals Spider Lily. Lycorine is poisonous and has been found in other species of Hymenocallis, but no one has examined H. coronaria for its presence and for the possible role it may have in deer herbivory. 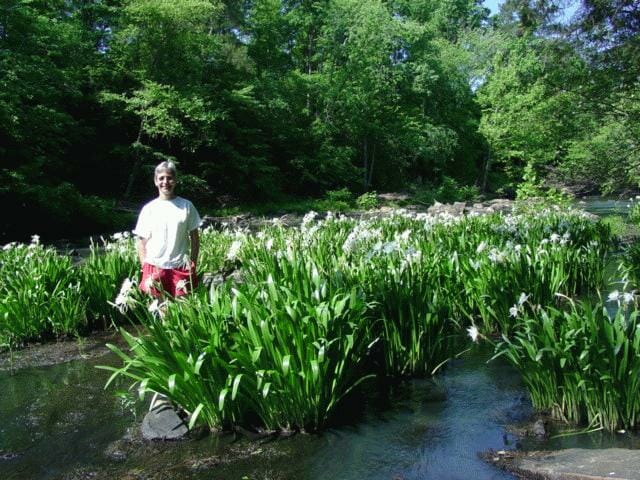 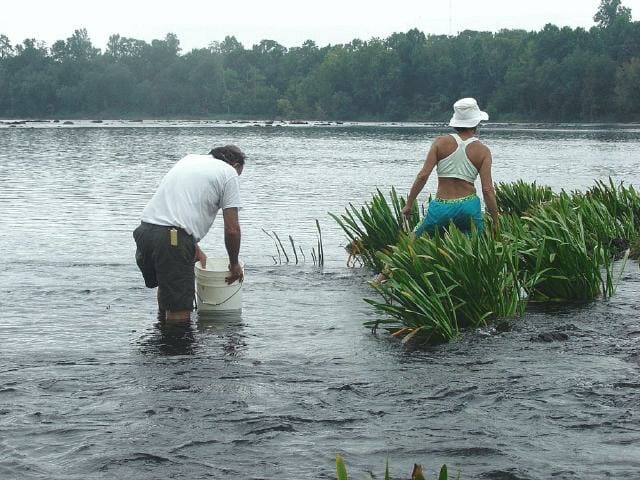 Dr. Wear and a volunteer looking for seedlings in the Savannah River 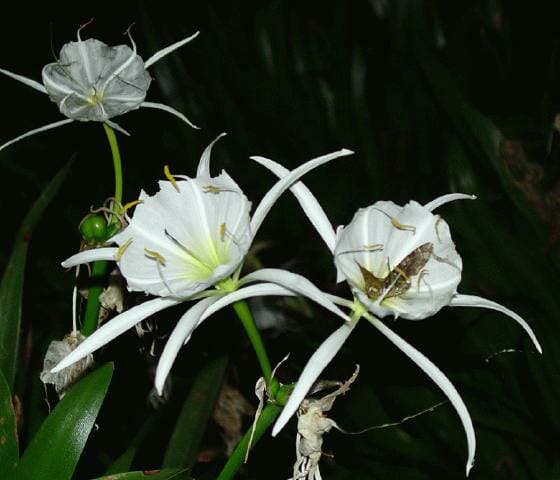 A presumed pollinator: a Pandora Moth, Eumorpha pandorus, in a lily flower

Dr. Wendy Zomlefer, Curator of the UGA Herbarium, project is about the state of Georgia’s Herbaria which house 400,000 specimens in 10 herbaria across Georgia. This proposal is a comprehensive survey of these essential facilities to assess current support, which is declining, and future needs and to promote collaborative efforts among them. She will visit 10 herbaria in Georgia during 2008 and into 2009.

Dr. John Pascarella, Dept. of Biology at Valdosta State University. (He will move to Georgia Southern University in August, 2008.) Pascarella is continuing his study of Baptisia arachnifera, Hairy Rattleweed, an endangered plant. This endemic legume occurs only within a 16 km area of southeastern Georgia, mainly on private land. This project will quantify light availability as it relates to forest succession and the need to maintain habitat conditions favorable for population persistence and growth of Baptisia arachnifera. This data will be important in determining management practices for future outplantings of this endangered plant.

Kimberly Spiegel, MS grad student at Georgia Southern University. Her research project will study the consequences of redbay mortality on forest communities on the mainland coastal plain. Redbay ,Persea borbonia, is a member of the Laurel family and is subject to laurel wilt disease spread by an introduced ambrosia beetle. (Georgia Forestry Commission concentrated their survey work in maritime communities on barrier islands.) Spiegel survey work will provide a comparison of forest composition before and after beetle infestation to document any change in species over time.

Melanie Kaeser is a permanent research staff member at the J. W. Jones Ecological Research Center in Newton, Georgia. Her work is geared toward native plant diversity in the longleaf pine ecosystem. As a member of the Native Ground Cover Partners project she collaborates with private landowners in southwest Georgia to assess cost-effective techniques and management strategies for restoring native ground cover species in longleaf pine ecosystems. This research project will determine the effect of several herbicides on species of grasses, legumes and composites native to the longleaf pine ecosystems and assess the pre-emergent and post-emergent properties of herbicides on plants of different ages. This knowledge is important for successful management activities but also for production of native seed.

Native herbaceous plants such as warm season grasses, legumes, and composites are important constituents of the longleaf pine ecosystem and increasingly are a major consideration in longleaf pine restoration efforts. Propagation of native species and on-site restoration often require the use of herbicides to control undesirable species. However, little is known about the effects of herbicides on the non-target, native plant species because most studies have focused on the efficacy of eradication of undesirable plants. The objective of this study is to further the understanding of herbicide use as a an effective restoration tool, particularly when establishment of native ground cover is a primary restoration goal. Specifically, this study will examine the effects of several common herbicides on non-target species of grasses, legumes, and asters native to the longleaf pine ecosystem of southwest Georgia and to assess the pre-emergent and post-emergent properties of the herbicides on plants of different ages. The native ground cover species considered in this study include 5 species of warm season grasses, 3 legumes, and 2 asters. Nine herbicides will be applied at 2 rates each and will be applied to plants of three age categories to determine pre-emergent and post-emergent properties of the herbicides. We will assess the effects of the herbicides three and six weeks after herbicide application using a phytotoxicity rating scale. Plants will be harvested six weeks after herbicide application, dried, and weighed to determine plant biomass. One-way analysis of variance (ANOVA) will be used to detect statistically significant differences in biomass of plants of different ages treated with herbicides, and biomass of plants with different herbicide application rates.